We are so accustomed to reading of molecular analyses being developed to enable medical advances for present and future use, that when someone directed me to an article in the February 2018 Journal of Archaeological Sciences which described DNA analysis being used to determine kinship on 12th dynasty (1985-1773 BC) mummies, my reaction was “WOW”.

The funeral practices of the ancient Egyptians, particularly mummified bodies, have given us record of social organization from the pre-Dynastic Period onwards.  However, as pointed out in this paper, inscription on tombs and morphological examination of the mummies can be ambiguous in determining familial relationships. 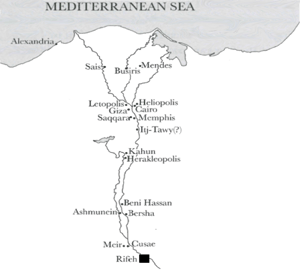 Two high status Egyptian mummies were found buried together in an undisturbed single tomb near Rifel, Egypt in 1907.  Coffin inscriptions named their mother (referred to as “The Lady of the House”) and indicated that they were brothers.  Studies over the years on the mummies conducted at the Manchester Museum beginning in 1908 concluded that the two mummies died 6 months apart, one dying when he was approximately 40 years old and the other when he was 60.

Studies raised questions about the accuracy of the inscriptions indicating both having the same mother, because the skeletal morphologies, particularly the skulls of two mummies, were noticeably different. Therefore, in 2017, DNA was extracted from the teeth of the two mummies.

Mitochondrial and Y Chromosomal DNA testing on the Mummies

The importance of this study lies in the ability to now analyze nucleic acid from mummies, which should ultimately lead to further information on familial relationships to complement the social relationships that appear to be more readily discerned by archeological studies.