The Next Big Thing in Diagnosis of Ebola 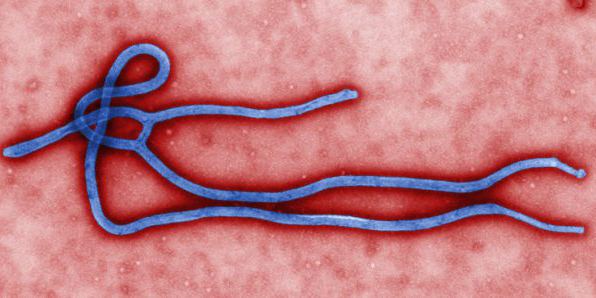 A review discussing advances in diagnosis and management of Ebola Virus Disease was published in Clinical Microbiology Newsletter in November and I thought it worthwhile to share information on the diagnostic improvements.

Ebola Virus, an RNA virus, is comprised of a group with six species. Four of the strains cause human disease and a fifth strain affects nonhuman primates and pigs. The disease has been identified primarily in sub-Sahara Africa. It has high mortality in those infected. It is thought to be carried by fruit bats and in some species of nonhuman primates. The bats and primates can transmit the virus to other animals and to humans, and, in addition, human-to-human transmission occurs.

Ebola Virus was first identified as an etiological cause of hemorrhagic fever in 1976 Since then 20 other Ebola outbreaks have been identified. In the outbreak in West Africa in 2014-16 there were approximately 20,000 cases identified and 11,000 deaths were recorded. An outbreak in the Democratic Republic of the Congo began in 2018 and continues today. It has had a mortality of almost 70%.

When Ebola was first identified, it was confined more to rural than urban regions. Today it is being seen in urban settings where it is more difficult to control.

The disease has an incubation period of 2 – 21 days. The asymptomatic patient incubating the infection is not believed to be capable of transmitting disease. The infection appears to be transmissible only after symptoms develop. Initially, symptoms are non-specific with fever, malaise, myalgia, headache, progressing to vomiting and diarrhea and ultimately, the patient will get well or there will be further deterioration with bleeding and multi-organ failure. Rapid diagnosis is essential so the infected patients can be isolated, and in so far as possible, prevent further transmission of disease.

EBOV can be transmitted through direct contact with mucous membranes or skin abrasions if they come in contact with:

1) Blood or body fluid, including urine, saliva, sweat, feces, and vomit from an infected individual, sub-human primate or fruit bat, whether dead or alive.

2) Objects contaminated with the virus, for example, clothes, bedding, and medical equipment.

3) Through contact with certain body fluids of a patient who has recovered from the infection, even if they have no evidence of infection. This can occur because the virus can remain in areas of the body that are immunological privileged and include testes, the interior of the eye, placenta, and central nervous system, particularly cerebrospinal fluid.

5) Ebola does not appear to cause risk to travelers or the public who have not cared for or been in close contact with an infected patient, animal or contaminated objects. However, healthcare workers who do not use proper infection control while caring for infected patients, or family and friends in contact with infected patients during the early symptomatology period are at significant risk of contracting the infection.

The disease has an incubation period of 2 – 21 days. The asymptomatic patient incubating the infection is not known to transmit the disease. The infection appears to be transmissible once symptoms develop. Symptoms initially are non-specific with fever, malaise, myalgia, and headache, progressing to vomiting and diarrhea. Ultimately, the patient will get well or there will be further deterioration with bleeding and multi-organ failure. The key is rapid diagnosis so that infected patients can be isolated, and, in so far as possible, prevent nosocomial infection.

Currently, there are two detection methods in use to identify the virus and diagnose the disease: lateral flow immunoassay and molecular analysis.

1) The immunoassays have been utilized in testing blood from infected patients and sputum acquired from Ebola deaths. The sensitivity is dependent on the presence of adequate virion concentration and in some studies has been shown to be almost 100% sensitive and highly specific.

2) In October 2019, the FDA allowed the marketing of the first rapid immunoassay diagnostic test for detecting Ebola virus antigens, the OraQuick Ebola Rapid Antigen test. Until then, all the assays approved for use were labeled by the FDA as Emergency Use Authorization. In the October announcement, the FDA stated “The amount of Ebola virus when patients have severe symptoms is usually high; however, the amount of virus in samples taken early after infection when symptoms are not yet present or taken early during the course of the disease when symptoms are mild can be very low. The studies demonstrated the importance of testing only symptomatic individuals so that the amount of virus is high enough to be detectable by this test.” “The OraQuick Ebola Test is not intended to be used for general Ebola infection screening (e.g. airport screening) or testing of individuals at risk of exposure without observable signs of infection”.

3) RT-PCR technology has been used under FDA Emergency Use Authorization during recent and current epidemics in Africa. These are sensitive and can detect lower numbers of virions than the immunoassay methodologies. However, RT-PCR requires manual extraction and technical expertise and has a longer turn- around time than immunoassay.

4) Recently there have been self-contained molecular systems developed which are sensitive, and less cumbersome than prior molecular technologies. The BioFire molecular procedure requires rehydration of a pouch and addition of the pouch contents and the patient sample into the Film Array instrument that performs hands-free extraction and amplification. Results are available in 90 minutes. Studies have shown high sensitivity and specificity.

5) Cepheid also produces an RT-PCR test for Ebola. The instrument has a self-contained cartridge that reduces the potential of nosocomial infection and an on-demand 95-minute throughput. Two studies have shown close to 100% sensitivity and specific.

6) The advantage of both of these molecular methodologies is that there is minimal specimen handling, the analyzer performs the test interpretation plus there is rapid turn-around time.

Newly recognized diseases, new technological developments…..We are extremely fortunate to witness the evolution of technologies enabling us to provide more rapid and higher quality care to our patients.